Big Hank’s Tribute to the Blues Songs of Christmas

Join Victoria’s swing kings for a night of blues and R&B holiday tunes from the 50’s through the 60’s. 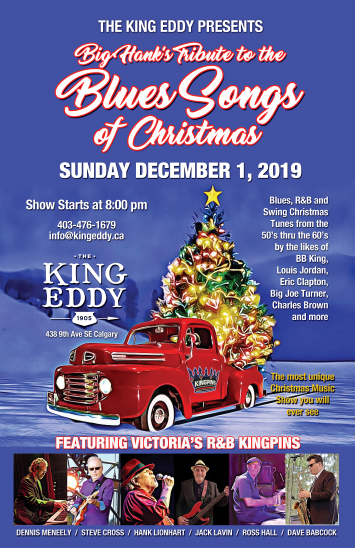 About Big Hank’s Tribute to the Blues Songs of Christmas:
Big Hank has been singing the blues since 1974. He is a former RCA Recording Artist and member of the Victoria Music Hall of Fame. He toured extensively in the 80′s opening for such legends as Muddy Waters, Joe Cocker, James Cotton, Koko Taylor and Paul Butterfield to name a few. Additionally, in January of 2015 he had the opportunity to represent British Columbia in Memphis at the International Blues Challenge with his band.

Big Hank’s band The R&B Kingpins are a tight 6 piece band.So take a turn on off the “Traditional” path and enjoy a glimpse into the heart and soul of Christmas from a Blues point of view played by this exceptional group of world class musician’s.

Big Hank is known for his powerful voice and whether he is performing with gut-wrenching drive or gently caressing a moment of musical tenderness, you’ll feel the magic of the holiday blues right down to your toes.

This show is a collection of traditional Blues Christmas tunes from the 20’s, 30’s, 40’s 50’s, and 60’s, by the likes of Louis Jordan, Big Joe Turner, BB King, Eric Clapton, Charles Brown, Etta James and more. It’s not the standard collection of carols, rather it’s a tribute that gives you a look into the souls of the fabulous music legends sharing their Christmas Blues. A refreshing take on a holiday concert, it has played to sold-out houses and received rave reviews across British Columbia for the past 4 years.

This show played to sold out houses and standing ovations in BC and Alberta last winter and has had rave reviews here on the Island and lower mainland.

This is not the usual Christmas Show of standard Christmas carols you know but a tribute that gives you a look into the souls of these fabulous Blues Legends by sharing the Christmas Blues songs written by them. You will find it a very refreshing take on a Christmas Music Show.